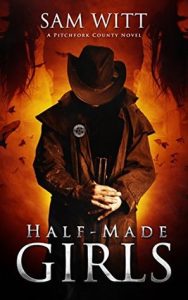 Characters
Joe Hark is definitely a flawed hero, maybe even an anti-hero. He’s a violent alcoholic who shoots first and doesn’t bother to ask questions because he thinks he already knows the answers. Or he doesn’t care. But according to his lights, he’s doing the best he can to keep the darkness out of Pitchfork County – the job his father died doing.

Stevie Hark is as complex a character as Joe; her dark heritage is almost as big a barrier between herself and her husband as the curse her mother laid.

Interestingly, Joe and Stevie’s children – thirteen-year-old Alasdair and eight-year-old Elsa aren’t just the ciphers or cute comic relief that children often are in books. They have their own darkness and their own power, and take an active part in the story as something other than hostages to fortune.

I’m looking forward to reading more about these characters – especially Stevie. Sam Witt seems to be an author who writes women well – like Jim Butcher, he treats his male and female characters the same. Both get the same level of thought and development put into them, and there’s the same sense that they have history that the reader doesn’t know about yet.

Setting
I loved Pitchfork County. I wouldn’t want to live there, mind you. I wouldn’t even want to visit. But as a setting for a dark urban fantasy/horror novel, it works <i>really well</i>. It’s a place of grinding poverty, drug addiction, despair, and black magic, and it suits the storyline perfectly.

I’m British, so the setting of Pitchfork County is pretty alien for me: the nearest we have is probably run-down council estates, or pit villages where the closing of the pit left poverty and despair. Come to think of it, Pitchfork County is similar – just bigger. And with more black magic. Probably (but you never know). However, Pitchfork County is definitely quintessentially American.

Plot
To be honest, this was the weakest aspect of the story – Joe does a lot of driving around shooting people, but not a great deal of thinking. This means that the plot isn’t as complex as it might be. However, the setting and characters are more than solid enough to make this a minor quibble rather than a dealbreaker.

I could have done with a bit more explanation – the girls are half-made, but what would they have been if they had been fully-made? Why does it make a difference? I suppose the problem is that Joe isn’t really the introspective type. Maybe future books will have more Stevie in them – she seems to be quite a bit brighter than her husband. 🙂

Summary
The Pitchfork County series has been compared with the Dresden Files and while it’s closer to Dresden than some other series, if you’re expecting humour and pop-culture references, go elsewhere. This is dark, gritty, and violent in a way that the Dresden Files books just aren’t. It’s closer to Stephen Blackmoore’s Eric Carter books (which aren’t available on Kindle in the UK, dammit).

This was a very solid four-star book for me – it didn’t quite have the zing that would have made it five stars, but I’ll definitely be reading more of Sam Witt’s work.