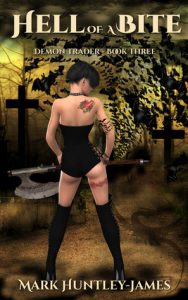 Hell of a Bite, by Mark Huntley-James

This is the third in Huntley-James’ Demon Trader series, and as such, is not the place to start. When experiencing the acid-trip insanity of Huntley-James’ writing, it’s best to start at the beginning so that you can be sure that, yes indeed, it’s not you, it’s him.

So start with Hell Of A Deal.

This series is not for the faint of heart or the prudish, but by the time you get to Book 3, people who can’t take the heat should have got out of the kitchen. Hell of a Bite continues the tale of the troubles of Paul Moore, ex-demon-trader, who would rather like a quiet life but probably isn’t going to get it. This time, someone has come up with a plan for a vampire theme park; Paul is sure there’s going to be something wrong with the idea, but he doesn’t know what…

As usual, it starts with “can you just” and rapidly spirals out of control. Huntley-James writes with verve, humour, and a complete disregard for good taste – which you should be used to by now if you’ve read the first two books in the series. Hell of a Bite is a worthy entry, and it’s noticeable that Huntley-James is making efficient use of his characters – Mickey Twitch (awful, but not quite awful enough to kill) is back, and so are the Nimmers, who have gradually changed from being generic thugs to being much more interesting and fun (and they remind me a lot of some people I know). I do like the Nimmers. 🙂

As usual, you shouldn’t expect deep and complex character development, or a complicated plot worthy of an evil genius (not in a book with Mickey Twitch in it) but you should expect a rollercoaster ride of the special kind of crazy that lives in Huntley-James’ head. If you enjoyed the previous two, you’ll enjoy this one as well – and it’s the perfect antidote to a bad day, because however bad your day was, Paul Moore’s is worse!