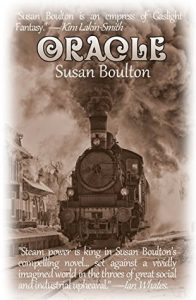 Sometimes, you know you’re going to enjoy a book within the first page. This was one of those books; Boulton hooked me almost immediately. Her characters are likeable and well-drawn – she avoids the pitfall of making her villains too villainous to believe – and the plot is just what I like: politics and manoeuvring, rather than a lot of screaming and rushing around. (OK, I also like violence, but even then I like it to come with actual plot.)

Boulton’s world has a lot in common with late 19th-century England, just as the industrial revolution is really starting to kick in with the accompanying riots, but with some extra twists – a species of villeinage (“bond-servants”) seems to have survived (or been resurrected), but the monarchy has not, although the country is ruled by a hereditary aristocracy.

This was a solid four star read – at times, I thought it might even make five stars (which I don’t often give). There were only two things which let it down: firstly, the resolution seemed to come a little too easily to the characters. At a cost, yes, but still… And secondly, there was a definite feel that this would have done best as Book 1 of a series, or at least a duology. There is sufficient world-building for an excellent series, and also enough plot is left unresolved for certainly a second book. So much so that I do wonder whether that was Boulton’s original intention. If so, it’s a pity that she never wrote a follow-up.