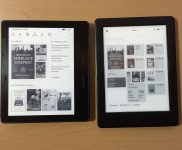 It’s official. I have no self-control. Breaking strain of a KitKat.

I have bought a Kindle. Not just any Kindle. The most expensive Kindle on the market. The Kindle I said I would definitely never, not ever, buy. Because it was far too expensive to justify. And stuff.

In my defence, it was my birthday, and the far-too-expensive Kindle was partially paid for by birthday money from my husband and my parents, and birthday money – should you be lucky enough to be financially stable – is meant for buying frivolous things that you can’t otherwise justify (like Kindles), not ordinary stuff like socks.

I always said, I would never have a Kindle. I was a Kobo girl. I don’t have anything against Amazon (how could I, when Amazon made it viable to be an indie author?) but Kindles never tempted me – they were too big, too clunky, especially compared to my three Kobos. The big Kobo is waterproof; the little Kobo has a 5″ screen; and the Kobo that is just right is a 6″-screened piece of elegance, far nicer than any Kindle I’d seen. And half the price.

Up until Amazon brought out a Kindle that is more than 30g lighter than my late, lamented Sony PRS-T1.

I’m a gadget girl. Other women, or so I read, love buying clothes and shoes. I can be in and out of a clothes shop in under 30 seconds, trailing my poor husband like the tail of a kite: “Do keep up!” On the other hand, when he sneaked off to PC World without me, the cad, we had Words. Not that I wanted anything there in particular; I just wanted to look. So I completely understand the desire to spend half the morning looking at clothes and then not buying any. I just do it with electronics.

I bought the WiFi only version; not only am I unlikely to be so desperate for reading matter that I will need to buy a book where there is no WiFi, but in the unlikely event that that happens, I can use the personal hotspot function on my iPhone to provide WiFi. So, no need to pay the extra £80 or however much it is to get the 3G version.

It is slightly shorter than my Kobo Glo HD, and slightly wider, so it’s kind of square. There’s a wider non-screen part on one side, for holding, and that’s where the buttons are.

The case, which also contains half the battery, is a nice bit of kit. It just clicks into place, guided by magnets. There’s no fiddling around trying to get bits lined up – it just finds its own way. There is also no audible “click”. Very nice. There are also magnets in the flippy part of the case, so that when you fold it back underneath the Kindle for one-handed reading with the case on, it sticks there.

Setting up was very easy. It arrived already knowing who I was, so it connected to my Amazon account straight out of the box, as soon as I input the house WiFi password. It automatically connected to Goodreads too, but you can disconnect it, or change the account to which it connects, in the Settings (settings>reading options>social networks).

You can also connect your Kindle to your Twitter and/or Facebook accounts, which I have not done.

The on-off button is at the top, with the micro-USB port, if you hold it in your right hand. If you hold it in your left, they’re at the bottom. A nice touch is that the Kindle detects which way around it is, and flips the screen so that you can use it right-handed or left-handed. The buttons also flip, so the top button is always page-forward, and the bottom is always page-back. However, if you prefer, you can go into “settings” and swap them over so that the top button is “back” and the bottom one is “forward”. I’ve done that, because I have small hands and I had to stretch slightly for my thumb to hit the top button.

Comparison to my Kobo Glo HD

I am going to keep the Kindle, and it will become my primary reading device (and so I should hope, at that price).

For me, this was my first Kindle, so I get the “Kindle experience” for the first time, and I would not have bought the older Kindles: they are all bigger and heavier than my Kobo. The lightness of the Oasis was a major factor for me.

However, many of the things that push me in that direction are not completely related to the Kindle Oasis itself – more to its essential Kindleness: the integration with Goodreads, the link with the Kindle apps. I do really like the lightness of the Oasis, and its flat screen, but my Kobo was perfectly good. More than good – the Kobo is a very nice piece of kit in its own right.

Moreover, the Kobo has a nicer and more useful homepage, as it always shows the book you last opened, and you can rearrange it pretty much how you want.

So I’d say… unless you want an Oasis just because you really want the best Kindle out there, it’s a lovely piece of kit but ultimately not worth the price as a reader. But something that many reviewers seem to forget is that practical utility is only part of the reason why people buy a product. It’s like cars: a Toyota Aygo and a Porsche Boxer are both relatively small cars that will get you from A to B. But people still buy Porsches, because they don’t just want sensible transport – they want a luxury experience. The Oasis is like the Porsche of readers: expensive and luxurious, but if all you want is something to allow you to read ebooks, not the one to go for. If you’re a serious reader, and you want the luxury, and you’re more concerned about the physical form factor than having the ability to set up your text exactly how you want it, then the Oasis will give you what you want.