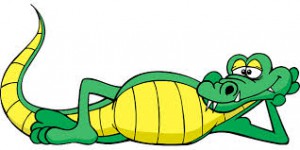 This Thursday, I am going to do a very scary thing.

I’m going to go to a writers’ group. It’s called New Street Authors, and it’s for self-published authors (present or future) in Birmingham.

As far as I know, they aren’t cannibals (though one should arrive half-an-hour early if one wishes to eat, so maybe they are…) and I haven’t been told that potential new members have to wrestle alligators. Possibly this is because there aren’t many alligators in Birmingham.

I met one member – David Wake – at the Asylum (steampunk event, not mental institution – just saying), and got talking. So, there we go. If this blog suddenly goes quiet after Thursday, you’ll know that either they are cannibals, or there really was alligator-wrestling, and the alligator won.

Being a member of a writers’ group is often recommended, and I can see why. It’s very easy to get too close to your own work, so you don’t spot the gaping holes in the plot, or that your main character is a perfect little miss-goody-two-shoes whom all right-thinking readers are going to hate. I think it’s a bit like parents who think their own little darlings are sweet and amusing, whereas everyone else knows they’re horrifically spoilt little brats who should have been drowned at birth.

Of course, it’s important to pick a group who are willing to actually say “your plot sucks, your main character is an idiot, your pacing flows like treacle in winter… but the font you’ve chosen is pretty nice.” Feedback that tells you where you need to improve is far more valuable (though difficult to accept) than praise. Since this group is all self-published authors, I’m hoping that this is the sort of feedback that will be on offer. It will also be nice (I hope) to meet up with and talk to other people who have already gone down the path I will be taking – and, later, people who are on the same path I am taking.

But there’s still that sense of… these people are real authors. And here am I with my 45,000 words of story which is in no way ready for anyone else to see yet. I haven’t finished the first draft, let alone done the major editing that I know will be required. I’ve never been to a writers’ group before – I’ve never been to a writing class before. There is a distinct feeling that these people are the real thing, and I’m a fraud – and it’ll take about four seconds for them to figure that out and feed me to the alligator.

Even if they don’t feed me to the alligator, will it be a case of “shut up until you’ve published your first book”? I hope not. Of course, one hopes that if that was going to be the case, they wouldn’t be inviting new people. But, hey, I’m nervous. I’m not a people person. I’m a lot more comfortable behind a screen, with a keyboard in front of me, than in a pub with actual people in front of me.

And, of course, this is my first step towards being a real writer. Not someone with half a story and a blog. Once I go out and meet real people, in the real world, I’ve made a commitment. I’ve told real people that I’m writing a book. And that means I can’t back out.

And that’s scary too.