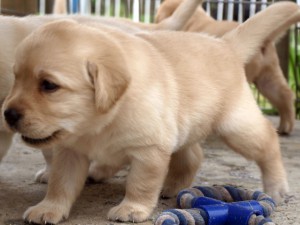 Recently, I read the latest book in a series, and it left me feeling… betrayed. It’s as if you’d been using toilet paper all your life and enjoyed watching the adverts featuring happy Labrador puppies, and never realised – until now – that toilet paper was actually made of Labrador puppies, which were skinned alive and left to die in horrible agony to achieve that soft, strong feel. And after finding out about it, you never feel the same way about toilet paper ever again. In fact, you seriously consider not using it any more.

That’s how this book left me feeling.

I’m not saying it was a bad book. In fact, it was quite a good book. But it led me to reassess the main character’s words and actions throughout the rest of the series. I’d thought that she was a person who’d found herself in a position she hadn’t anticipated, and wouldn’t have asked for, but having found herself there had come to terms with it and made a good, happy life for herself.

Then this book comes along. And I find myself wondering, was she happy after all? Or was it just a facade, and she was really increasingly miserable and bitter all along? Was the whole series – which I’d regarded as clever and reasonably cheerful – built on this woman’s hidden misery?

It reminded me of a similar experience when I was a child and I realised that the Narnia books, with their stories of children discovering new worlds and having adventures (mostly the boys, admittedly), weren’t the exciting tales I’d thought. They were, instead, thinly-veiled Christian polemics and the ending was just plain sick (quite apart from the obvious Susan’s-going-to-hell-because-she-likes-lipstick thing, which says a lot more about C.S. Lewis and his attitude to women than it does about poor Susan). There’s something particularly nasty about a book that tries to make you think that three of the main characters dying in a train crash is a happy ending. Or, alternatively, that not having to grow up is a happy ending. But for me, the real shock was that the books were not what I had been led to expect. I’d thought I was having fun, and it turned out that I was being preached at. Silly me for not guessing earlier, I suppose.

There was also a fashion, in the 1980s or 90s, I think, for stories that ended “and s/he woke up and it was all a dream.” At which point, the reader mentally screams “You what? You put me through all that for nothing!” (And I admit that I did it at least once – in my English Language GCSE exam, I think – but it was because I’d run out of time and had to end the story somehow.)

The question becomes, then, when is it right for an author to do that (not counting exams)?

Obviously, a story is the author’s train set, and they can play with it however they want. But if you set up your story in one way, and then don’t deliver, your readers are going to be pretty shocked.

Shocked is sometimes a good thing; it means that author has succeeded in doing something that their readers didn’t predict. But could it have been predicted, or was it just sprung on the unsuspecting readers like an ambush?

Personally, I think that’s the difference between a good shock and a bad one.

Veronica Roth’s Divergent trilogy would probably be an example of the former. This is not a series I have read, or probably ever will: it chronicles Tris’ development towards understanding the true nature of self-sacrifice. I do not find a lifelong desire to sacrifice oneself for others to be an attractive personality trait, and I don’t really want to read about a young woman spending her life trying to figure out the best reasons for getting herself killed on behalf of others. However, that aside, from what I’ve read, the “switched on” reader should be able to see what Roth is setting up. Tris repeatedly tries to get herself killed, in a number of different ways and for different reasons, but each time she is saved. By the end of the third book, she understands that “sacrifice should come from love, strength and necessity”, and, as she has reached that pinnacle of understanding, Roth allows her to die.

It’s quite brave for an author to kill off a main character, especially in young adult books, as dying isn’t usually on the menu. But, in the case of Divergent, Roth has spent the entire series setting up Tris’ death;  the clues are all right there: Tris wants to die, and she finally achieves it after three books of trying. It’s really the readers’ own expectations – i.e., that the heroines of young adult books should do the socially-expected thing and survive, get married, and have babies – that lead them up the garden path. Kudos to Roth, then, for making it work, for letting readers deceive themselves (despite all the evidence) into believing Tris will get over her obsession with self-sacrifice, or that Roth herself won’t have the guts to kill off her heroine.

On the other hand, you’ve got retcon.

In the series before the book I’ve just read (and which may have scarred me, if not for life, at least for the next month or two), there were no hints whatsoever of what the author pulled in The Last Book. She says she’d been holding onto the possibility of one revelation for years, and did nothing to deliberately confirm or deny. On the one hand, I can see why. On the other, as a reader, I feel betrayed.

Part of the fun of reading (for me) is to see if you can work out what’s coming up next. I love Jim Butcher for this, because you don’t see it going forwards, but you certainly see it looking back. Whenever he springs a surprise on you, you have all the fun of going back and seeing where he’s been carefully setting it up for the last seven books, and you didn’t spot it. So you always wonder, what’s he doing now? Can I guess what this book is setting up for seven books in the future? I don’t know whether Jim thinks his readers are smart enough to spot him doing it, or dumb enough that they won’t – or if he just doesn’t care either way, and only wants to write the best books that he can. But whatever the answer is, he never does the “Oh, that was happening all along – but just never ‘on page’.”

So, for me, the answer is always going to be, yes, do your best to surprise your readers. Do the stage magician thing, and fool them into thinking you’re doing one thing when you’re doing another, or get them looking in one direction while you hastily move things around to avoid having to actually saw your assistant in half (the paperwork would be ghastly, doing it the other way). But your readers should, I think, always be able to go back and see exactly how you fooled them, thereby getting double the fun out of the book.

But to do the “Oh, it was like that all along… didn’t I mention it?” is just wrong. To me, it’s lazy from a writing perspective because the author doesn’t have to do all the work of setting up the illusion (or even any forward planning at all, in particularly bad cases). And as a reader, I hate it because for really big changes, there should have been hints. It just doesn’t play for me, that an entire empire, or an entire relationship, could have been hiding in plain sight through several books without so much as a hint.

But then, that’s just my opinion. 🙂