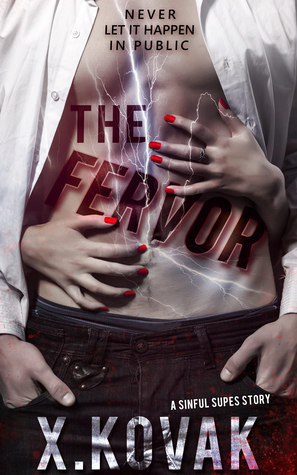 The Fervor, by X. Kovak

This short story introduces both Claire (who has recently discovered she is part-succubus, which explains a lot but is basically Bad News for her), and Lucas, who is an alpha werewolf (Bad News for other people).

Pay attention, because these people are going to reappear in later books, I think.

Claire. I liked Claire immediately; her life has just been turned upside down by the news that she’s now classified as Supernatural, and Kovak gets a nice balance between too much complaining about the unfairness of it all (whiny and annoying) and too brave and calm (not believable). She comes off as real, and someone that I wouldn’t mind spending time with in real life.

Lucas. Now, this came as a real shock. Generally, I hate alpha male characters because they tend to be a) interchangeable and b) a$$holes who need to die. Lucas actually has a personality, and his role in the story is more than just object-of-heroine’s-lust. Kovak has put in some other things that made him different from the usual run of interchangeable alphas, which you will discover when you read the story.

The situation. Honestly, I don’t think that the blurb does this justice, because the blurb implies that we’re going to get a sort of standard unpopular-girl-does-something-embarrassing-in-class situation, and the alpha will feel sorry for her, mop up her tears, and they’ll get together…. Not happening. This is not one of those nasty, preachy books where the author tries to beat you over the head with Issues – but, really, people, the potential to accidentally cause a pheromone-induced orgy amongst a bunch of people who might be strangers (or, worse, family!) isn’t amusing. Who is to blame when people end up having sex with people they wouldn’t normally choose to? What might the consequences of removing everybody’s inhibitions be? Kovak has thought through the implications for the people involved; it’s not played for laughs, and we end up with a far more satisfying read for it.

The background world. This is a short story; we don’t find out much about the background because there just isn’t the space, but Kovak has set up something interesting. Reminds of me of some parallels in American history, which you will discover when you read the story.

Honestly, there wasn’t anything, and I can usually find something to bitch about.

2 thoughts on “Review: The Fervor, by X. Kovak”