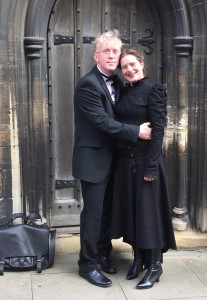 Not that kind of asylum; the men in white coats haven’t come to take me away. Yet.

It is, apparently, the biggest steampunk festival in Europe, and I could well believe it. My husband and I went; it was our first steampunk event, and we weren’t quite sure what to expect. In fact, we booked a decent hotel and only two days (rather than the full four-day event) so that we would have somewhere comfortable to hide if we wanted to, and we also wouldn’t have wasted too much money if we turned out to hate it.

So, we dug out the most steampunkish clothes we had out of our respective wardrobes, and off we went.

Luckily, it all went very well. Nobody died. Nothing blew up. We missed the tea duelling, but I did manage to ask someone what it was, so that’s one of the big questions out of the way.

We didn’t hate it. We met lots of lovely people, and saw some interesting things. There was one particular sort of sculpture thing which we saw in the makers’ tent, made out of some silver forks, some more metal, cogs and springs, and an acrylic ball. This description doesn’t do it justice. It was fascinating and beautiful, and I stared at it for quite a long time. It’s one of those things that you can appreciate the artistry and craftsmanship that went into it, and sincerely admire it, without in any way wanting it in your house. If I had to live with it, I think I’d always be wondering what it was planning.

Then there was the talk on Anarchists (just in case any of us had not already figured out how to make a simple bomb, that potential lacuna was filled in), and the one on ray guns. I have to admit, the star of my weekend, though, was the airship designer. His name wasn’t on the programme, and although we were told what it was at the beginning of the talk, I didn’t catch it.

Airships are a staple of steampunk fiction, and it seems as though you can hardly have steampunk without at least one dirigible floating majestically across the sky. But the Age of the Airship  (in reality) ended with the loss of the R101 in 1930 and then, the final nail the coffin, the Hindenburg in 1937. The speaker gave us a potted history of the development of lighter-than-air flight, and a run-down of modern airship development. Airships are, apparently, too large, too slow, too uneconomical and too unreliable to be used for passenger or cargo transport – but there are niches where they can play to their strengths, such as the ability to stay in one place for a long time doing not a lot, or the ability to stay up in the air for a long time without refuelling. These niches are advertising (obviously), surveillance and reconnaissance, and delivering scientists and their supplies to remote areas. There is also a potential for development of, basically, flying wind turbines – a cross between a kite, a balloon, and a windmill. While this might be a bit doom-and-gloom for anyone who hankers after the glory days, from a writing perspective, it was very useful. After all, if you’re going to write about something, you really need to know how it works in order to avoid making embarrassing mistakes – and also to take advantage of any useful features that might supply Plot. The advantage of talking to a real airship designer was finding out things that you might otherwise not, unless you deliberately went looking, like why they’re so huge (the bigger they are, the more efficient they are – it’s to do with the volume of gas), and that you can’t run an airship with a couple of blokes. You need a ground crew. Apparently the really big passenger ships needed a ground crew of two hundred. So, brilliant talk. I learned things; a definite win.

Interestingly, there were several talks of interest to budding writers, of which the steampunk crowd seems to be full. It was good to talk to people – R. B. Harkess, David Wake, and Steve Turnbull – who’ve been there, done that, and come back to report. Mostly, they reported that traditional publishing was practically impossible to get into, and self-publishing was not a cake-walk (not news, if you spend much time on the internet looking), and I gained some useful advice on how to do it right. Writing the thing is the easy part; then you have to do formatting and marketing, and that really sorts the men from the boys.

So, a successful weekend, with new things learned (always good), and hopefully some new friends made. And next year, hopefully we’ll make it to the ballroom dancing classes (my husband will have bought some steel-toe-capped shoes by then) and the tea duelling.