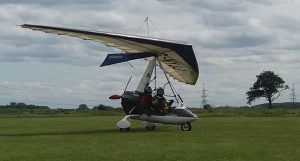 Coming in to land

When other girls wanted to be teachers or models or nurses, I wanted to be an airline pilot. I loved the idea of learning to fly, and when I went on my first holiday flight, it was magical. Then real life happened. I realised that I wasn’t the sort of person who would be happy living out of a suitcase, and also that flying lessons were expensive. So I gave up the idea. It got a bit of a poke when I went to university: one of the first people I met was a qualified pilot. Her parents had bought her a flying lesson for her sixteenth birthday, and she’d loved it so much that they’d let her carry on learning. She didn’t have a driving licence, but she was qualified to fly for hire!

Once I got my first real job, I thought, “this time I’ll really do it”… only it never happened. I was sensible and got a mortgage instead.

But yesterday, I finally lived the dream – a half-hour ‘trial’ flight in a microlight.

A microlight is basically a very small aircraft. There are two sorts: flexwing and fixed wing. Fixed wing microlights are teeny, tiny little aeroplanes – less than 450kg fully loaded with fuel, pilot and passenger, maximum of two seats. The flexwing type are what most people think of as microlights: the unholy union of a pushchair and a hang-glider.

I went up in a flexwing.

When I first saw it, I more or less knew what to expect, but wasn’t prepared for quite how little there was of it. I was expecting higher sides on the buggy, at least! For someone who doesn’t even like changing lightbulbs, getting into an aircraft which is mostly not there with the intention of going several thousand feet up in the air was definitely nerve-wracking.

For flying in flexwing, one wears a warm flying suit, warm gloves, a helmet with a visor, and an intercom – which in this case worked through a sort of umbilical cord – so that pilot and passenger can speak to each other. I was given the choice of holding onto either the sides of the microlight, or onto the instructor’s shoulders – I chose the former, as I didn’t think the poor man would appreciate bruises.

Take-off was brilliant: in a flexwing, you get the wind in your face, and you trundle down the field at increasing speed until you suddenly rise into the air. I was surprised by how much I didn’t want to scream and beg to be let down. Not, as we climbed up to 2,000+ feet, that I was entirely comfortable. In fact, I spent the first twenty minutes of a half-hour flight with pretty much every muscle tensed, gripping onto the sides of the microlight like grim death. Exhilarating and terrifying at the same time!

One steers a flexwing microlight like a hang-glider: with a triangular bar coming down from the wing. The person in the front side usually does the steering, although the microlight I was in was modified so that someone could also steer from the back – which meant that two D-shaped loops had been welded onto the diagonal downward parts of the triangle to make rudimentary handles. It’s really designed so that an instructor in the back seat can take control if a student screws up – but in my case was used to give me a taste of steering myself!

Steering with the instructor’s handles, from the backseat, is much more difficult – you have less leverage because you’re holding the bars further up, nearer to the wing, and – especially in my case, since I’m short – reaching out at almost full extension, so I was using my upper arm muscles instead of my abdominal muscles. I have to say, it felt like I was trying to drag the wing around by main force! Apparently, if you’re steering from the front seat – the real pilot’s seat – you can steer with your fingertips.

I hope so, because, writing this a day later, my upper arms ache!

Flying 2000+ feet up in a microlight, feeling the wind buffeting against you, and knowing that there is nothing between you and the ground below is an amazing experience. Scary. But amazing.

From the fear perspective, I found I could handle level flight quite well – but going up or down made my stomach slide back and forth. However, I am proud to be able to say that when given a choice between the ‘boring’ way of losing height (a gentle slope down) and the ‘fun’ way (a relatively steep downward spiral), I chose the fun way. And I didn’t scream or clutch anything on the way down. But the instructor was right – it was fun!

As an experience, it was everything I had hoped it would be. I’ve never done anything like it – even though being that high up with nothing between me and splat was pretty scary, it wasn’t as paralysingly terrifying as I had feared it would be. It’s hard to describe it as anything other than amazing.

And I’m going to do it again next weekend – this time for an hour, a proper lesson. If the fear-quotient goes down further, who knows? I might carry on and get my licence!