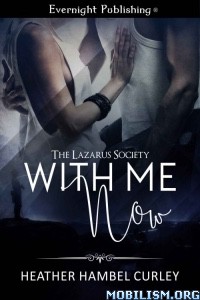 With Me Now, Heather Hambel Curley

I’ve just finished reading With Me Now, which is Heather Hambel Curley’s first-published novel (though not the first-written – that’s Anything You Ask Of Me, which is due for publication in August). I’ve reviewed it on Amazon and Goodreads, so I shan’t do that here.

My last post on this blog was about a book I’d expected to enjoy but ended up not being particularly thrilled with, because I just couldn’t connect to the main character. With Me Now was almost exactly the other way around – it’s a contemporary romance, and I don’t generally read them. But, because it was Heather’s book, I bought a copy and read it, and enjoyed it much, much more than I had thought. I read it in two sittings – would have been one, except that when I’m in the office, the boss actually expects me to do some work.

The difference is that with With Me Now, I connected to the main character immediately. At first, I wasn’t sure whether I liked her much (anyone who gets arrested for underage drinking less than a month before she can drink legally, knowing what’s going to happen if she gets caught, does not have my instant respect), but I was immediately interested in what happened to her.

For me, it just goes to show that an established author isn’t necessarily more likely to hit the spot than a new author.

The second thing that really hit me about With Me Now is the culture shock. I’m British (English if you want to be specific), and With Me Now is written by an American, about Americans, and set in America. Pretty much the first scene hammered me with the difference between the US and the UK: in the UK, not only is the legal age for buying alcohol 18 (so university hall of residence parties are perfectly legal unless the neighbours complain about the noise) but it’s legal for younger persons to drink alcohol on private premises. The legal drinking age for drinking on private premises (not buying alcohol) in the UK is five. So for Madison (the heroine) to get arrested just for drinking was really weird. I mean, she can vote, get married, have sex, but not drink a shandy? Deeply, deeply weird. But then, I suppose to an American, the idea of it being legal to give alcohol to a five-year-old is also pretty strange.

The other time I got hit with a culture-shock brick was just one throwaway line: Madison finds the way Mike (the love interest) changes gear in his jeep sexy. It’s manual, so he has to work the pedals, and this is obviously pretty unusual. Only, it’s not unusual over here. In America, most cars – or so I have heard – are automatics. Over here, most cars are manual. Automatics aren’t exactly rare, but they’re certainly not the norm. So changing gear doesn’t have the sexy mystique over here that it does for Madison (at least, not unless you have some fairly specialised sexual tastes, and I believe there are websites for that). It also doesn’t work the other way. I’ve never driven an automatic, but my husband has, and two impressions stuck with him:

In a way, those moments of culture shock made With Me Now even better for me. Not only was the book a window into Madison’s and Mike’s world, but it was also a window into Heather’s – a world where it can be legal for a person to have sex but not to have a glass of wine; where pressing the clutch is sexy – and where ghosts exist.

Although maybe not that last…